The Russian Boar is brownish black with split hairs at the end. The snout is long and straight. Large males can have over 4 inches of tusks protruding from the lower jaw. A mature male can weigh well over 350+ pounds.

Hunting Russian Boar in Tennessee can be one of the most exhilarating hunting adventures due to their aggressive behavior. These are not domestic hogs, but wild beasts. The Russian Boar is our most popular animal. And you thought Texas was the big state, check out our Tennessee wild boar. 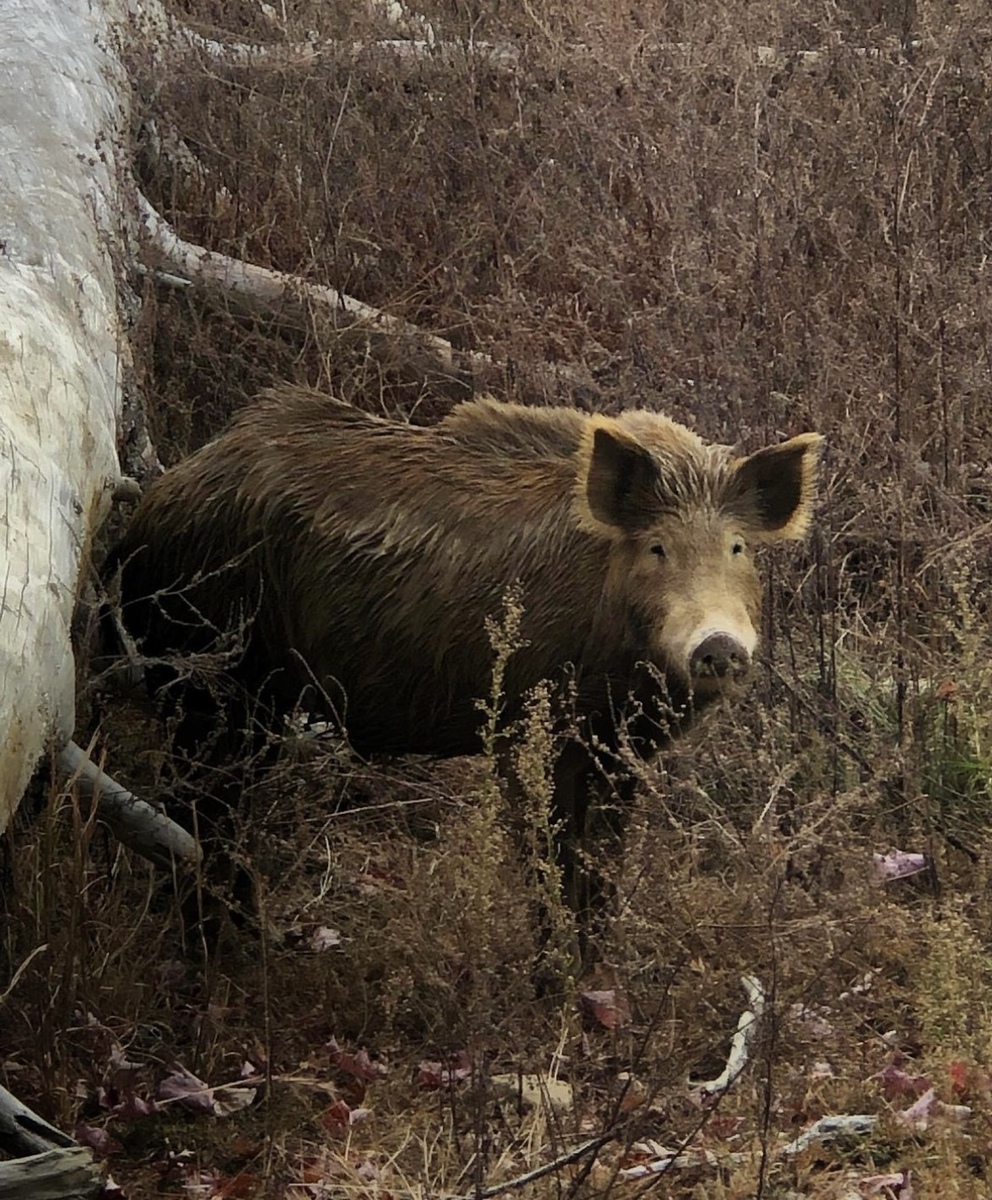 The razorback boar can be found in many regions of the country. It looks like a cross between the Russian Boar and Feral Hog. This boar has a high ridge down the middle of its back which makes it look very aggressive. If you’re a boar hunter then the Tennessee grown razorback is one that needs to be on your wall.

The Fallow Deer is a medium-sized animal characterized by palmate antlers. The fallow deer, found wild in western Asia and southern Europe, is about 3 ft high at the shoulders, and spotted white in summer.

Fallow deer can come in a variety of colors. There are Spotted Fallow, White Fallow, Chocolate Fallow, and Brown Fallow. Making this an exciting breed to hunt.

The bucks and does live apart until the mating season, which is usually in October; in June the does usually bear one fawn, but occasionally two or three.

Axis Deer are one of the most pristine of all the exotic deer, with a beautiful three by three horn configuration towering up to 40 inches tall. This is a must for any hunter’s trophy room.

Axis Deer are originally from Europe and were imported in the 1800’s. Their unique spotted coat makes them one of the most beautiful of all the deer species.

Bucks shed their horns on their birthday with rut taking place from July until September. Axis can weigh in excess of 250 lbs and stand more than 50 in tall. Axis deer are elusive and can be a great challenge to the experienced hunter. This magnificent animal can be seen on most days at Wilderness Hunting Lodge.

Black Buck Antelope are one of the most popular exotic animals with black beveled horns and a body color ranging from black to golden brown.

This beautiful native of India grows blacker on his back in winter and also as he grows older. The females and young are blonde on the back and also have the white stomachs and legs. The Black Buck reproduces well in West Texas and can be maintained behind a standard heighth sheep and goat fence.

Male Black Buck Antelope have black fur on their upper parts and white fur on their chest, belly, the inner sides of their legs, and on their muzzle and chin. They have white rings around their eyes and they have long, ringed horns that spiral with three to four turns and are up to 28 inches long. The males are born light brown then turn black around three years of age. Males stand about 32 inches tall at the shoulders and weigh between 71 and 95 pounds. Female Black Buck Antelope are smaller, are beige or light brown and usually do not have horns, however, if they do, the horns are not ringed and spiraled as the males are. Black Buck Antelope are the fastest animals on earth and can out run any other animal over long distances. They can run almost 50 miles per hour when necessary.

The Sika Deer is smaller than many of the other exotic species of deer. A trophy class Sika is usually a four by four antler configuration.

These small but majestic animals make a wonderful addition to any trophy room. With their thick mane, dark coat and white antlers you will not want to mistake this great animal for a small elk.

This striking sheep is completely white or golden colored with a white face. The horns grow up, out, down, forward, up, and out. A large male will weigh 140 pounds while a female will weigh 75 pounds. The Texas Dall sheep is a hybrid sheep that originated in Texas. A white Texas Dall ram with big horns and a long beard is hard to beat. They look similar to an Alaskan Dall sheep. This is one of the most popular rams to hunt in Tennessee or for that matter anywhere in the US.

The Rambouillet or Merino is a large, attractive animal best known for its beautiful wool fleece. Throughout its existence, this breed has lived in a variety of different climates and adapted well to each of them. They are capable of living in both very hot weather, like that of North Africa and Spain, and very cold weather like that found in parts of Germany. Rambouillets have a very strong flocking instinct and they can be counted on to stay together, even in wide-open regions. Many hunters pass up on these magnificent animals because their wool can become dirty and discolored. Don’t let that fool you, a good taxidermist can make the cape as white as snow.

These sheep are black in color and sometimes have an outer coat of reddish wool. They will frequently have a white muzzle. The horns are usually dark. They grow up, back, down, forward, up, and out. A large male can weigh 140 pounds and a female will weigh about 75 pounds. There are fewer Black Hawaiian Rams than the other sheep species. They can have a thick, nice beard on their neck. Sailors put these sheep off in the Hawaiian Islands so they could have fresh meat when they returned.

If you are looking at the most bang for the buck, then the Corsican Ram is were you want to begin. The Corsican is a hybrid sheep that began its history in Texas about 40 years ago. Rams will usually be brown with a black or white belly. Males will often have long black hair on the neck that many call a ruff. The horn configuration on a ram can vary from a tight curl similar to a Mouflon sheep or wide and flaring horn configuration. Horn lengths on a trophy sized animal start at about 30 inches and exceptional specimens can grow horns that can reach the 38 to 40 inch mark.

The mouflon sheep lives on the islands of Sardinia, Corsica and Cyprus. It is considered to be endangered in its native habitat. It is a mountain sheep and a grazer. The animal does have a voice and warns other sheep by bleating in different tones.

The mouflon sheep is the mountain sheep that develops a woolly undercoat in the winter. Two of its distinguishing characteristics is a saddle looking spot on its back and heart shaped horns (see picture). They usually live in groups of 20-30. The sheep use its curved horns to protect itself.

The mouflon stands about 27 in. tall at the shoulders. It is a reddish brown color, marked with a dark stripe down its neck and shoulders. 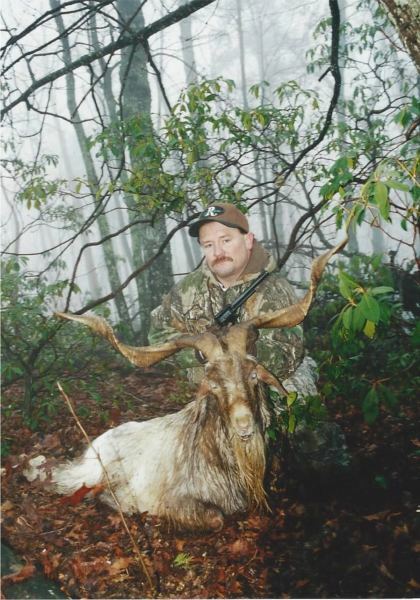 If you are looking for something that will stand out in your trophy room the Spanish and Catalina Goats have stately horns and make for excellent trophies for your collection. Hunted year round on our preserve these are a fun hunting adventure. Originally imported by the Spanish, both breeds are popular today as game. In the mountains at Wilderness, they can be a challenge to find.

The Spanish goats on our preserve vary in color and typically have horns from 18 to 34 inches long. These goats average 140 pounds.

The Aoudad, or Barbary sheep, is a goat-like antelope commonly found in the rocky mountain regions of North Africa. The Aoudad stand 30-40 inches at the shoulders and weigh from 90-310 pounds.

This is a magnificent animal which is usually mounted in a half body to show off its beautiful long flowing chaps down the front legs. Don’t let the majestic look of this animal fool you. It is one of the most difficult exotic animals to harvest.

Elk can be distinguished from other deer by their large size, brown or tan bodies, and yellowish-brown tail and rump patch. They have thick necks and slender legs and can stand as tall as 5 feet at the shoulders. Their long legs enable them to run as fast as 35 miles per hour. Males weigh from 600 to 1,100 pounds and have six-tined antlers that can grow up to 5 feet long. Antlers begin growing in early spring and fall off in winter. The females are smaller, about 450 to 650 pounds, and lack antlers. Mating season is in August or September. Females give birth to one or two calves each spring, and newborn calves weigh up to 40 pounds.

Elk can live in many different environments. When able to move freely, elk like mountain areas in summer and lower wooded dense forests in the winter.

Woods and grasslands abound with various types of elk food, including leaves, sedges, shrubs, mushrooms, and lichens. In addition to eating leaves and bark from trees, elk use seedlings to mark their territory. Males strip off bark with their antlers, and females pull off bark with their teeth. Then both males and females rub the seedlings with chins and muzzles to cover the plants with scent. 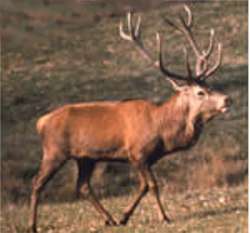 The Red Stag is one of our most popular species of exotics. This large animal with its beautiful reddish brown coat and crowned antlers makes a great addition to any trophy room.

A mature male will have antlers with 5 to 7 points per antler. Mature males weigh 400+ pounds and females weigh about 250 pounds.

Red deer are the European cousin of the North American elk. Male red deer are called stags. Mature males have 3 or more points sprouting from the end of the antler called a crown. 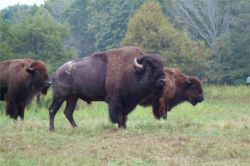 Originating in Eurasia, the American Bison, or Buffalo, is now the largest terrestrial mammal in North America. Its two subspecies are the Plains Bison (flat backs) and the Wood Bison (large humped back).

Bison lose their shaggy, dark brown winter coat for a lightweight, light brown summer coat. Bison can reach over 6 feet tall and 10 feet long weighing over 2,000 pounds. The heads and forequarters are massive, and both male and female have short, curved horns used for defense and fighting for status among the herd. The mating season in August and September will yield a single reddish-brown calf the following spring. The calf will nurse for one year and reach maturity at 3 years of age. Bison have a life expectancy of 18-22 years.

The bison once inhabited the Great Plains in massive herds, stretching as far north as Canada and as far south as Mexico, and from Oregon almost to the Atlantic Ocean. They were central to the lifestyle of the Native Americans in these regions. But by 1884, the American Bison were hunted to near extinction. Various wildlife preserves have collaborated with zoos and national parks to revitalize the population, which currently numbers 350,000.

Small scale hunting is allowed currently in some areas. Even still today, bison are noted for their hides and meat, which is lower in fat and cholesterol than beef. 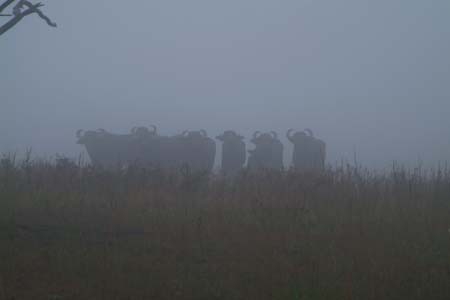 The Water Buffalo is usually black or gray in color. The horns sweep our and up much like the cape buffalo. Males can weigh 1500 pounds. Water buffalo are apt to completely submerge themselves under water for a minute or longer. 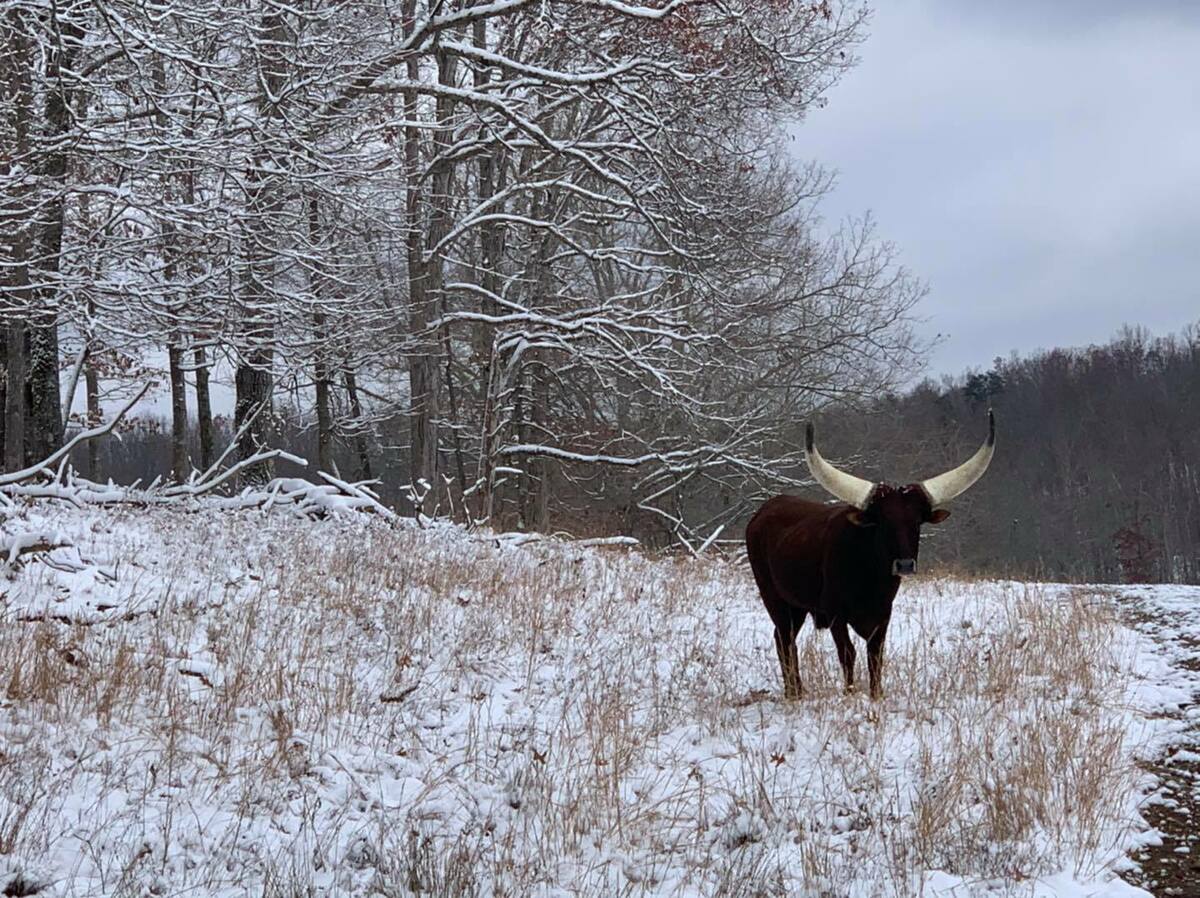 The Watusi herd at Wilderness Hunting Lodge are striking and will make you stop and look twice. The African breed is best known for its large horn circumference. They have the largest horn circumference of any of the breeds of cattle in the world.

The Ankole Watusi is medium in size, with cows weighing 900 – 1200 pounds and bulls weighing 1000 – 1600 pounds. If you are looking for a unique trophy that will also fill the freezer than you need to check out our herd of Watusi.

These are not all of the types of exotic animals you will find at our ranch in Tennessee, but a good representation of the variety you will see on any hunt.

designed and loved by: